Thumbs up for Lila!

This past summer I wrote about Lila's struggle over sucking her thumb. Despite her sincere desire to stop, it seemed she was fighting a losing battle (or should I say thumb wrestle). Her dad was constantly on her case about it, while I was the enabler, totally coddling her and making excuses-- "She just needs it to {fill in the blank} relax, calm down, stop crying, fall asleep... She doesn't do it that often anymore."  In the back of my mind, I worried that she would be in high school still sucking that thumb.

Well, who would have thought that a little holiday magic and a whole lot of stubborn will power would do the trick. I have discovered that when Lila decides (for herself) to do something, then you could count on it being done. She is a determined, independent little person with her own goals and agenda. We did, however, get a little help from Santa.

A couple days before Christmas, (thanks to a suggestion from Annabelle) Lila received a video email message from the North Pole. It was Santa Claus! He had a personalized message just for Lila. He knew her name, age, favorite color, what she wanted for Christmas... but what was most fascinating of all was that he had a special challenge for her. For the new year, Santa suggested that Lila should "stop sucking her thumb."

Lila gasped and covered her mouth. "How did Santa know?!"

A few days later, Lila asked if I would buy her the "special nail polish." During one of my motivational / I-can-relate talks with Lila, I had shared  that I used to bite my nails as a child and had to wear bitter-tasting nail polish to break the habit. So, we went to Walgreens and purchased "Thum," a disgusting-tasting product made with cayenne pepper extract (described as "harmless"). After applying it to Lila's thumb, without her looking I tasted it myself. "GAK!!!" It was so bad! I was worried for Lila.

That night, Lila faced her challenge head on. After storytime, came the tears and the pleading, "I want to suck my thumb! I can't sleep! I want to suck my thumb!" I got back in the bed with her. She tossed and turned and tossed and turned. She shook and snapped and tugged the blankets, flipped and hit her pillow several times. She whined and yelled and cried. But she did NOT suck her thumb. Finally she calmed down enough for me to wrap my arm around her. I held her hand and within a few minutes, she fell asleep. Success! She made it through one night.

The next day she was so proud of herself and as a reward she got to download a new Ipad app.

When I thought now I would have to spend every night holding her hand, Lila came up with her own idea to move forward with her goal. She now sleeps with a puppet on her hand. Brillant!

By January 1, Lila successfully completed her New Year's Resolution. I tell ya', this little girl is my hero. I can't even tell you how many resolutions, goals, and intentions I've had that were left undone. Lila truly amazes me and inspires me everyday to do a little better. 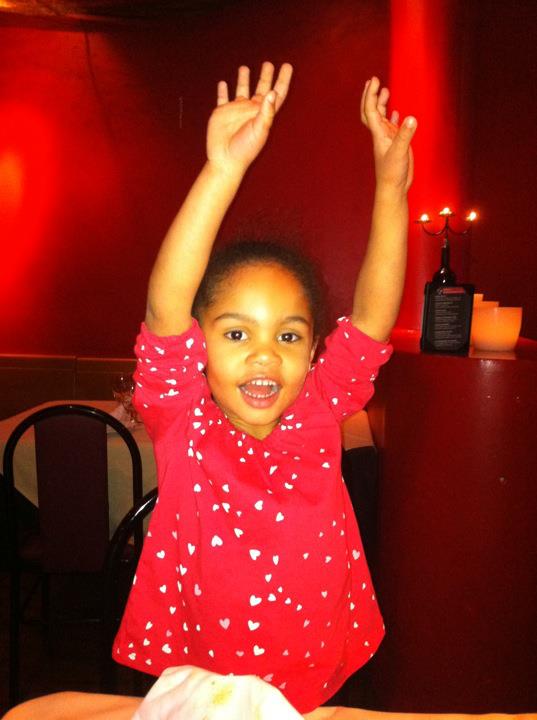 Email ThisBlogThis!Share to TwitterShare to FacebookShare to Pinterest
Labels: growing up, parenting