I'm not saying I wished the raspberries into being. But, it sure felt like I did. A couple of weeks ago on Facebook, a friend posted an adorable photo of her daughter holding some freshly-picked raspberries from their backyard.
"Wow, those look delicious," I thought. "I wish we had a patch of raspberries in our backyard."
The thing is, we do have a raspberry patch. However, for the past four years, whenever we looked at the raspberry patch, the raspberries were in various stages of not being ready to be eaten or just eaten by various wildlife. I think I have eaten a total of three raspberries from this bush in the past four years.

Last week, I ventured out to the raspberries with tentative optimism, and I was amazed to see hundreds of ripe raspberries ready for the picking. I motioned Clara to come over with wild hand motions and a whispering voice as though if I talked too loudly the raspberries might disappear. It almost felt like they were a figment of my imagination. We spent half an hour eagerly filling up a colander with our discovery and the bounty was sufficient that we even left some ready raspberries on the bush for another day. 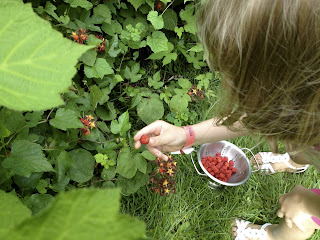 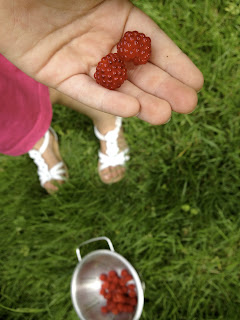 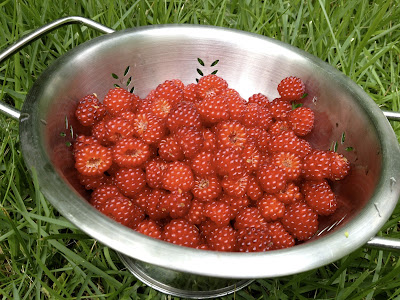 After washing our raspberries, my mind began to dance with raspberry recipes. I never had enough raspberries to actually make something with them in the past so this was a daunting but exciting thought. I went to my computer to research raspberry recipes, and about ten minutes later, Clara came into the room and asked sheepishly, "Is it OK if I ate them all?" I actually could not believe that she could eat that many raspberries in one short sitting, but sure enough, there were just six or seven lone raspberries hanging out at the bottom of the bowl.

Alas, my visions of making raspberry tarts, cobblers, and parfaits are on hold until the next berry picking adventure. However, I do have a favorite raspberry recipe that my dear cousin shared with me. It's better for the cooler months because you do have to turn on the oven, but it is amazingly easy and equally delicious. 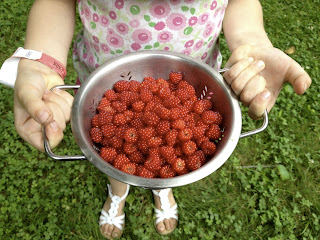 May you find unexpected berries or other happy surprises wherever you roam this summer.