My daughter the skeptic and Santa Claus

I believed in Santa Claus until I was at least ten years old or maybe even eleven. My disillusionment occurred swiftly, in one fell swoop.

My cousin who is six months older than me seemed to have absorbed all of the mysteries of life in one jam-packed playground tete-a-tete and excitedly shared her newfound news: there is no Santa Claus, no Tooth Fairy, and no Easter Bunny, and then proceeded to share the facts of life including a detailed description of menstruation. It was a bit overwhelming to have all of this information revealed at once. Although I had reason to believe the Easter Bunny did exist for a couple of years more, her information about Santa Claus proved true when I found the "gifts from Santa" stored in our basement weeks before Christmas morning.

I think that Clara, who is just five years old, has almost figured out the ins and outs of Santa all on her own.

The first clue came a few weeks ago when we were singing, "Santa Claus is coming to town." She noted that it seemed unlikely that Santa would be able to watch what every boy and girl was doing at all times while simultaneously making toys and supervising the elves in the North Pole. It seemed to be too much multi-tasking even for Santa. I didn't know quite how to respond, and so I suggested that she ask Santa that question when she saw him.

Since last year, Clara has been very suspicious of the different Santas we see at shopping malls or holiday events. "I don't think that's the real Santa," she reminds us at nearly every stop.

Luckily, the Santa at a local holiday event did look real to her, and she sat in his lap with excitement and a sense of wonder. Until he started talking.

"His breath smelled," Clara said. "And he said my favorite color is pink, and it's not really. My favorite color is purple or every color of the rainbow." "And he said that he wanted us to leave baby carrots for his reindeer because the big carrot we left last year was too hard for Rudolph to eat, but we didn't leave a carrot last year!" Hmmm, I thought, maybe Santa should stick to listening rather improvising small talk.

Then, yesterday, as we sat surrounded by wrapping paper, wrapping Papa's presents, Clara looked straight at me with her Robert DeNiro death stare. She likes to imitate his Meet the Parents "I'm watching you" expression ever since one of her older schoolmates showed her how to do it.

"I think you are hiding presents from me right now. Where are my presents?" Her gaze was unrelenting. I laughed nervously and agreed that I had some presents for her but reasoned that if I gave them all to her now then she wouldn't have them on Christmas. She kept staring. I felt she was one sentence away from asking if I was Santa before I quickly changed the subject.

I admit that it has always felt weird to me that one of the biggest holidays of the year is focused upon the lie of Santa Claus. As a Christian, there's already enough challenging ideas to explain to my daughter in this season like the virgin birth and returning to your birthplace to be counted for the census. It can be confusing to keep up with all of the Santa statistics in addition. But, don't worry, if Clara figures out that Santa is not real, I will make sure that she doesn't tell your kid. I'm not a fan of spoiling the magic for others. 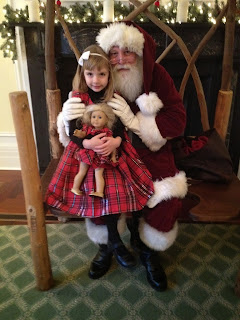 Despite Clara's consistent skepticism about some of the details about Santa, she is, for now, still a believer. Whatever her concerns are about Santa, she did wholeheartedly believe in the Gingerbread Baby, a runaway book character who was eating candy in the gingerbread traps she and her classmates left around the school. Each day, she came home from school, with another exciting addition to the saga of the runaway Gingerbread Baby.

What I most want is for Clara to have a sense of wonder and awe around the beauty of Christmas and about life in general. So, I won't be terribly disappointed if she figures out the Santa ruse, but I hope that she knows that there is more to life than logic and reason and intellect. I hope she always maintains the ability to believe in wondrous things beyond our understanding.