To be or not to be... the search for the perfect taboulleh

A local restaurant makes outstanding taboulleh, but it is particularly divine in the hours right after it is made. I head to the back of the restaurant where it's kept in a glass display, hopefully peeking for the tell-tale signs of freshness: a vivid green color, fluffy leaves, and not too much dampness. The restaurant owner caught me intently eyeing the taboulleh the last time I went in and shared a story about a man who recently stopped by the store and balked at the price tag for taboulleh.

The owner held his ground. "That is our price. You can take it or leave it."

The customer left. An hour later the owner got a call from the man's wife apologizing. "I'm so sorry about my husband. He has no idea about how much work goes into taboulleh."

I learned first hand this summer how much work it takes to make this salad. I am a fan of lemon in most anything and this dish has long been one of my favorite salads. I won over my husband with these recipes. He confessed that my taboulleh is "the quintessential summer salad, fresh and delicious!"

Taboulleh is essentially parsley salad with bulgur (a very tiny whole wheat grain), lemon, scallions, mint, and tomatoes. Not a fan of the parsley sprigs that often sit on the side of meals a garnish, I never imagined that parsley taking center stage could feel so nourishing and refreshing. I tried three different versions this summer to make it easier for you to choose which variation you prefer.

I went with Ina Garten's recipe for my first attempt at taboulleh. This recipe called for a full cup of bulgur wheat and cucumbers. I prepared a generous recipe of this for my niece's birthday, and it was nearly all gone by the end of the evening. I liked the crunch that the cucumbers gave to the salad, but I was striving for a more traditional taste with mostly parsley and mint and not as much bulgur wheat and no cucumbers. I used less kosher salt than this recipe called for and yet it still tasted very salty. We don't traditionally used much kosher salt so maybe I'm not used to the flavor.

It was a lot of work to cut up all the parsley. The recipe suggested 30 minutes of active prep time, but it took me closer to a full hour to chop the parsley and other ingredients. 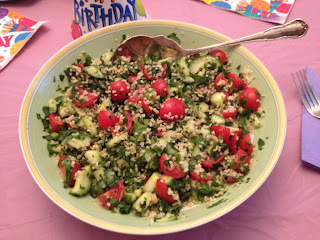 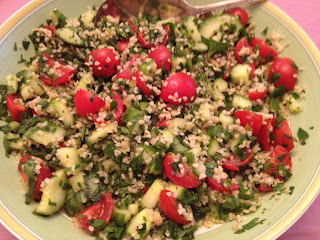 I went back to the Internet for a new recipe with less bulgur wheat and more greens and appropriately found this link: "Your Taboulleh Probably Has Too Much Bulgur In It." I knew I had found a kindred spirit when I read the author assert that "The only thing more refreshing than a mouthful of parsley and mint is a mouthful of parsley, mint, and lemon." I one hundred percent agree! I was surprisingly entranced by the accompanying video, never imagining that there were videos dedicated just to parsley preparation. 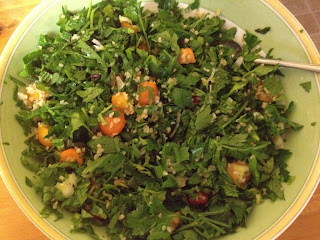 Despite my best hopes for this taboulleh, it turned out to be my least favorite. I followed the recipe closely except for swapping yellow and red tomatoes for the purely red tomatoes. I missed the bulgur wheat which almost disappeared amidst the parsley. The recipe didn't have the same vibrance of the first one. I tried dicing the tomatoes in a smaller size since that is what I see in more traditional recipes. Clara's friend, Lila, was visiting the day we made this, and she helped expertly cutting the tomatoes in quarters.

"Can't I just cut them in half instead?" she asked a couple of times.

I encouraged her to keep trying the quarters since that was the variation I wanted to try. In the end, I think Lila was right that cutting the tomatoes in half allows them to give more flavor. Despite my reservations about this version of the taboulleh, Clara and Lila loved it, and both asked for seconds! 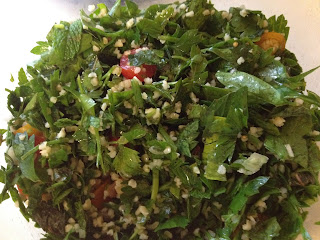 Since I spent a few weeks test-driving different taboulleh recipes, I figured I had to try the version at Le Pain Quotidien when I saw it on the menu. I knew from the description on the menu that it was a non-traditional preparation (quinoa instead of bulgur wheat, arugula instead of parsley, and avocados on the side). It was a very tasty and surprisingly filling lunch, but definitely a detour from what I was striving for. 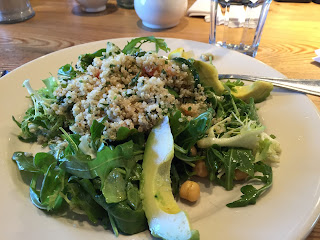 Taking my favorite elements of both recipes, I added more lemon, slightly less bulgur wheat, and more parsley. Over time, I learned how to chop a bit more efficiently and so now the preparation takes closer to 30 minutes. Here is my new taboulleh recipe:

Directions:
Place the bulgur in a large bowl, pour in the boiling water, add juice from two lemons, olive oil, and 1 1/2 teaspoons of salt. Stir, and let stand at room temperature for an hour or more.

Add the parsley, mint, scallions and tomatoes. Add juice from third lemon and 1 1/2 teaspoons of salt: mix well. Cover and refrigerate. The flavor improves if the tabbouleh sits for a few hours. Tabbouleh will last for a few days in the refrigerator. 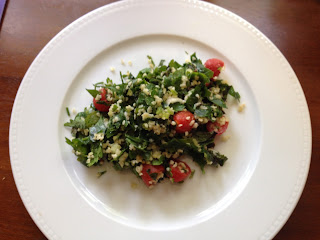 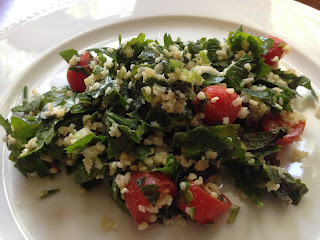 I am happy to have discovered how to make my own favorite taboulleh recipe... And now I know firsthand that $7.95 is a bargain to pay for someone else to do all of the chopping!