Yesterday morning, while waiting at a stop light on my way to work, I saw four mothers huddled together, their arms fiercely embracing their children, in a unified protective mama-bear stance. I wondered what harm they feared would befall their daughters and sons who seemed to be safely standing on the sidewalk.

The mothers' eyes darted expectantly, nervously, even defiantly to the north. I looked around to see if there was an accident I had not noticed. Just as the light turned green, I finally figured out what they were looking for: the yellow school bus that would take their children to their first day of school.

My daughter does not go to the local public school, and so I forgot that this was the first day of school for others in the community. I immediately identified with these women holding on to their children. These women were reluctant to release summer, to let go of their children. They were fearful of releasing their little ones to a world where there may be bullies and difficult tests and missed buses.

I often think of something my mother used to repeat around the start of a school year. She said she always hated when summer vacation came to an end because it meant less time with her children. Conversely, my aunt counted down the days until summer vacation when she would finally have the house to herself and some peace and quiet.

As a child, my mother's story made me feel loved and valued. As an adult, I see both points of view. One of the best benefits of being a teacher is the gift of time off during the summer. For me, it is a chance to have a taste of being a stay-at-home mom. However, I also value the structure and activities of the school year. I always wish that I could bring a little bit of the freedom and lazy-day feeling of summer to the frenetic pace of the school year.

Although summer can be a time of relaxation, it also comes with expectation for joy, for adventure, for increased community, for fulfilling dreams. Despite the seeming brightness of sunny days, summer can come with disappointments.

As a filmmaker who became a teacher, I always said to myself that I would use my summers to create films, and yet fourteen summers of being a teacher have come and gone. Yes, I have produced some short films (mostly about Clara). However, I have yet to maximize this time to create the grander documentaries I imagined. With more than two months of free time, summer reveals for me that time is not the obstacle preventing me from traveling or creating my dream documentary. Sure, there are practical obstacles, but perhaps there is also inner resistance or other fears that interfere.

In a recent New York Times op-ed piece, Tim Kreider wrote about learning to accept that his summer did not go as planned. He was hoping to go to Iceland, but life's logistics got in the way. Kreider writes:

"I didn’t go to Iceland, but I watched “Zapped!” and ate Taco Bell in a hospital bed, ...I saw a Perseid meteor streak across the night sky and vanish so fast it was hard to tell whether its incandescent trail was in the atmosphere, on my retina, or only in memory.

I suspect that the way I feel now, at summer’s end, is about how I’ll feel at the end of my life, assuming I have time and mind enough to reflect: bewildered by how unexpectedly everything turned out, regretful about all the things I didn’t get around to, clutching the handful of friends and funny stories I’ve amassed, and wondering where it all went."

I find myself overwhelmed with nostalgia at this time of year. Since I have been either a student or a teacher for more than thirty years, September feels like the truest beginning of a new year. A time of possibility and hope. A time of letting go of summer and what might have been. Like Kreider, I find myself taking tabs at the end of a summer, and even though another summer went by without producing an Oscar-winning documentary, and I, too, didn't travel as much as I planned to, I think there is value in acknowledging what was accomplished this summer even if it was something different than what I had intended.

This summer, after a year of writing a book, hunched over a laptop, I deliberately spent very little time on my computer. Instead I discovered local hiking spots, starting each morning with a walk in the woods. I began each day by lacing up my sneakers, telling myself I was ready to move before doing anything else. Just as Clara went outside of her comfort zone going to new sports camps, I ventured into a cardio boxing class, both of us challenging our physical limits in different ways.

This summer, I learned how to grow a vegetable garden, each morning looking expectantly for signs of flowers and growth, jumping up and down when I found my first fully grown cucumber that had been there for a while, but hiding under the leaves.

This summer, I learned how some water balloons and swings can bring neighbors together in play and community.

This summer, I had to ask someone I love for forgiveness, and she gave it to me even when I did not deserve it.

This summer, I spent time in the kitchen with Clara, teaching her how to cook. Even when she was not wearing much else, she always insisted on wearing her red, plaid children's apron every time we cooked. I loved seeing her joy in creating meals and her careful attention to presentation.

This summer, I kayaked to an island that in previous years felt too far and too scary to reach. 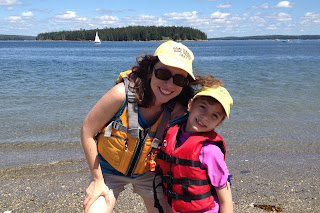 I am grateful for a simple summer, spent in the garden, in the woods, in the kitchen, and with friends.

Like those moms I saw yesterday at the bus stop, part of me wants to hold on to Clara and hold on to summer. Yet, school life is a busy life. It's time to create new syllabi and plan for another school year. Although the sun is setting earlier each night, I hope to carry with me a little bit of the promise and possibility of summer into my school year. And I will hug Clara a little tighter each night knowing that our once seemingly endless days of summer are coming to an end.