Choosing chores for a child

One of the highlights of Clara's day is the moment each morning when her teacher shuffles the job chart to reveal each students' job for the day. There is a very clear hierarchy in terms of the prestige of each role. Being the leader is by far the most desired role. When Clara is leader, she gets to do everything first from being the line leader to going first at morning meeting to reading aloud the schedule to all of her friends.

During one auspicious week with multiple snow days, Clara ended up being the leader three days in a row due to other students' absences. As you can imagine, this was one of Clara's favorite weeks of school all year.

Each of those three days, Clara came home incredulous and wide-eyed, proclaiming, "I was the leader... AGAIN!"

At school, the least desired role in the class is that of caboose, the student who has to go last in line when the students are traveling to other locations. At home, it seems that any task we assign is met with a similar reaction of disdain as though we are assigning Clara to be the caboose.

When Clara was four years old, we started to give her chores around the house. I thought it might be good to capitalize on her love of most jobs at school by calling these chores "jobs."

However, Clara has a firm idea of what is a job vs. a chore, and she is quick to roll her eyes at what is merely a chore when she would much rather complete a job. I am still trying to figure out a way to make all the chores seem like jobs!

Putting away the silverware was the first chore we gave Clara. When I sometime get mixed up and call Clara to the kitchen with a reminder "time to do your job"... she quickly corrects me and reluctantly trots out to the kitchen to complete her "chore." 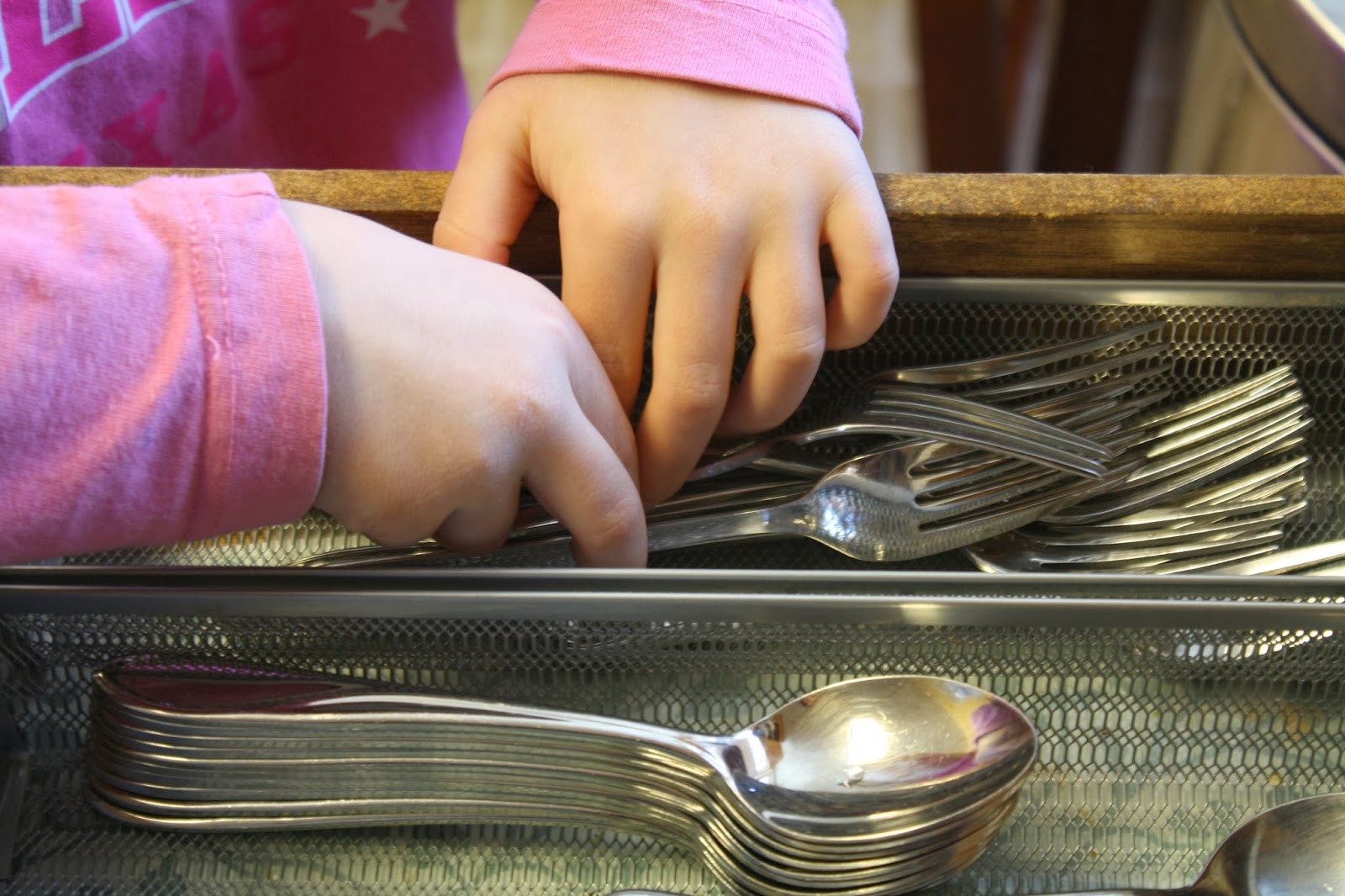 Another chore low on Clara's totem pole is cleaning up her toys. This is probably the biggest daily struggle we face since she plays with toys every day. Surprisingly, one of the tasks that proved to be most enjoyable to Clara is washing the dishes. She likes to fill a sink with soapy, warm water, and scrub big pots and pans. Clara is a good negotiator, and she knows that washing dishes is not one of my favorite chores. One day when I was reminding her to clean up her toys, she offered to wash the dishes instead if I picked up her toys! This arrangement worked out quite favorably for both of us. 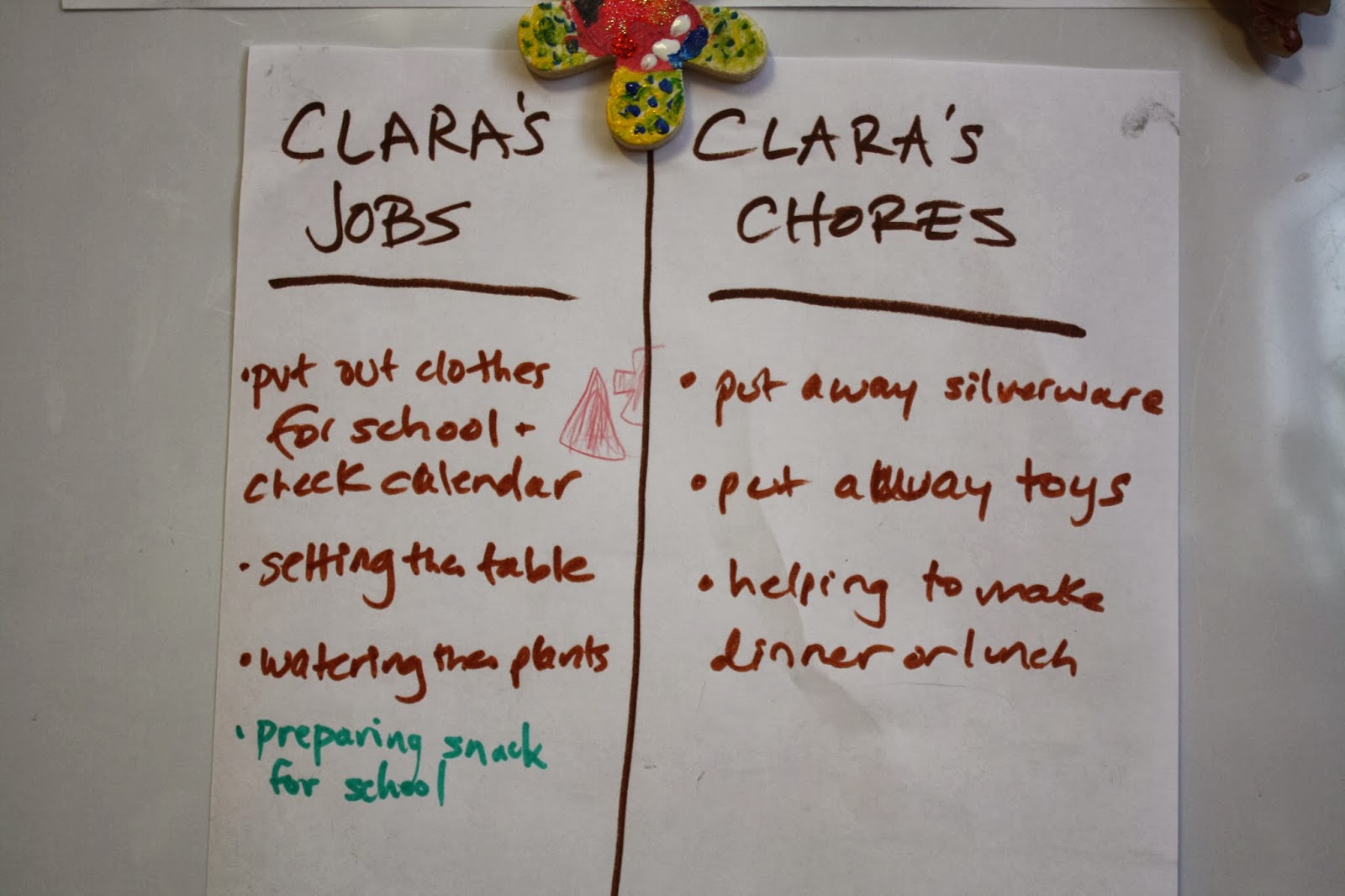 We haven't yet tried an allowance or a sticker chart. I'm hoping to reinforce the idea that these are helpful things to do around the house that Clara does as part of our family. I would rather not reward her for behavior that I consider being a part of our community, although when she is older I probably will give her an allowance.

As a seven-year-old, Clara became responsible for folding her own clothes after I washed them. This is probably the biggest way in which she helps with household responsibilities today. I feel a sense of relief as I divide up the warm clothes from the dryer and know I'm not alone in the final steps of folding the clothes and putting them away.

Have you found any good techniques to encourage a child to participate in jobs and chores at home?