So my daughter and I made our annual trek into NYC to go to the Jaffe Institute (one of the leading medical institutes researching pediatric allergies) at Mt. Sinai and praying against all odds that MAYBE Elisa will have outgrown something??  Being the tough cookie that she is, she sat through and endured 17 pricks to her arms and watched and resisted itching when the hives appeared. Well I wish I could say it was worth it…but Elisa reacted to all allergens that she was tested for...which are eggs, peanuts, tree nuts, shellfish...and now let's add seasonal ones too.  Major disappointment. *Sigh* 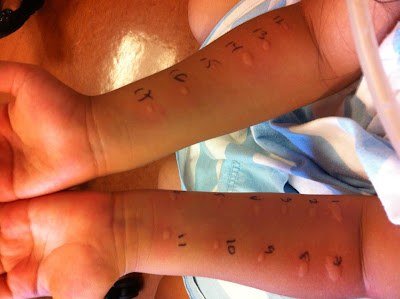 To make matters worse, she then had to have 4 vials of blood taken with a lab technician that clearly wasn’t the best at their job...let’s just say that I wasn’t getting my blood taken and I cringed. *BIG SIGH*  It’s frustrating to have a child who has severe allergies and you often have to wonder where you went wrong during your pregnancy or during the early stages of life to have been cursed with this added stress.  Maybe I shouldn’t have had that one extra hotdog when I was pregnant…but I really needed it!  Am I not feeding her enough organic foods?  But damn, Strawberries are ridiculously expensive when not in season!  And it’s a hard thing to imagine if you are not a parent that has to deal with it-checking labels all the time…having to argue with airline attendants regarding their nut policies…explaining to Elisa that yes, chickens probably can eat peanut butter and not get sick but she can’t.  It’s a good reminder to me how resilient and brave children are because then she just laughs it off and says, "That’s silly!" or "Maybe I can have eggs when I'm 5?"...and "Can I have ice cream now Mommy?"  And being the parent, I need to keep my tears in check and smile, and say, "Yes...maybe." and "Of course you can."  I don’t know if I would be able to deal so well with not being able to eat certain foods (actually, I KNOW I wouldn’t be able to)…and that’s a very humbling thing.

-Annabelle
Posted by Annabelle at 1:56 AM

Email ThisBlogThis!Share to TwitterShare to FacebookShare to Pinterest
Labels: motherhood